Song-Writing Contest won by Accountant for a second year

Song-Writing Contest won by Accountant for a second year 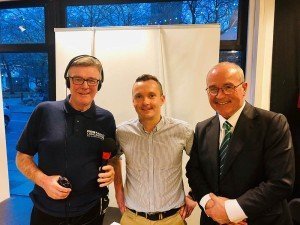 A Lancashire accountant’s skill as a songwriter has reaped dividends as he’s won the nationwide search for a song in our prestigious Last Choir Songwriting competition for the second time.

Simon Cox, from Lytham, submitted his song ‘Believe’ into the songwriting contest and his song triumphed based on a public vote. He was one of six people shortlisted from across the UK.  All the songs were performed on BBC Radio Lancashire before the vote opened.

Last year, Simon’s song ‘Golden Days’ also won the search for the song to be performed in the Last Choir Singing Grand Final.  The Competition Final was held at St George’s Hall, Blackburn.

Says Simon: “It was unbelievable to see my song ‘Golden Days’ performed in the Last Choir Singing finals last year and I cried at least four or five times!”

His new song ‘Believe’ will be performed by all the Last Choir Singing schools taking part in the June 2019 competition final.

Last Choir Singing is created and sponsored by True Bearing Chartered Financial Planners. The competition is the brainchild of True Bearing’s chairman, George Critchley, who announced Simon as the winning songwriter.

Simon, 43, may be an accountant but music is very much a part of his life. He first began playing a guitar in his early teens and at one time was a member of local band, Riser.  He played the guitar, performed backing vocals and wrote songs.

When Simon started work as a trainee accountant he moved away from the band, but not before he’d met his wife, Emma, with whom he now has five children.

What Inspired Simon to write ‘Believe’?

It was Emma’s connection with Brian House Hospice which began a fund-raising journey for ‘Golden Days’, last year’s winner. The song raises money for the hospice every time it is downloaded from iTunes. Simon was approached to audition for Britain’s Got Talent when producers saw ‘Golden Days’ performed on YouTube with local schoolchildren.

The Britain’s Got Talent journey didn’t progress, but Simon wrote ‘Believe’ as another song in the repertoire in case it was needed for the television show.

He said: “Believe includes all the classic tricks that wows an audience such as a key change and a rap. I’ve not heard it performed by a choir yet, but I’m excited and think it will sound brilliant.”